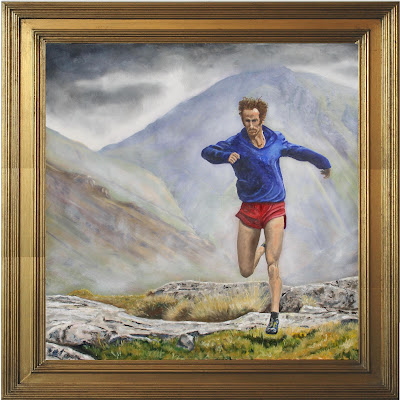 I've been planning to do this one for quite a while now, every since I saw the original photograph on the cover of the Keith Richardson book 'Joss', a biography of the fell running legend Joss Naylor MBE. 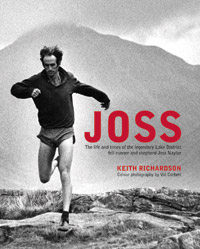 The photograph is by the late Brian Duff so I had to obtain permission from his family who own the copyright to be able to paint it.

There were clearly some challenges here.  Firstly, once again it's painting from a photograph and not real life.  Secondly the photo contained more than the usual mix of photographic distortions not least of which is the massive foreshortening which brought the background hills much closer than they appear in real life.  Also, how did he get that haze around Joss? This was in the days before Photoshop.  Finally, it's monochrome so I was going to have to decide on the colour scheme.

This painting is important to me as it is in the genre that I want to specialise in: mountain activity scenes, and it is of a real celebrity in the fell and ultra running circles in the UK.  I have plans to hopefully use this painting to raise some money for charity.

So, I had to plan this one carefully.  I started by getting used to the image by making some pencil sketches. 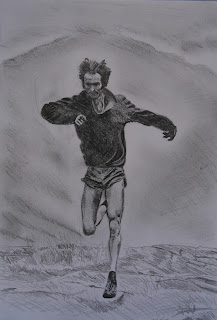 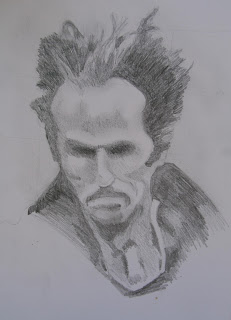 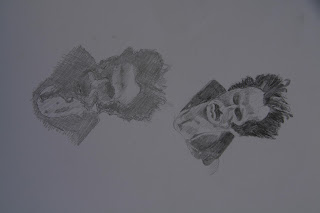 The face was a mass of shadows making it difficult to extract any detail but there was just enough to work with.  I then did a value sketch in oils on a 10" x 10" board, as the tones within the picture were vital to making it work.  I was particularly keen to get the figure to stand out against the background. 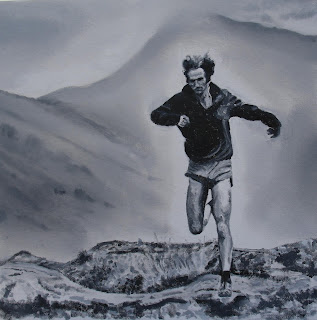 Before doing this I had to choose the composition.  I tried various positions with Joss on the left, in the centre and finally chose the one above with him appearing to run into the picture from the right hand side.  A square shape also seemed to suit the composition within a nice diagonal running from top right to bottom left.  His arms are on the horizontal golden mean whilst the left hand side of his body (his right) is on the vertical.

Next I  had to decide on what colour his kit was.  I tried various combinations, using a scanned image and Microsoft Paint, before going with a dark blue top and red shorts.  I couldn't make out the type or make of shoes he was wearing in the photograph so I changed them to the classic Walshes which he typically wears. 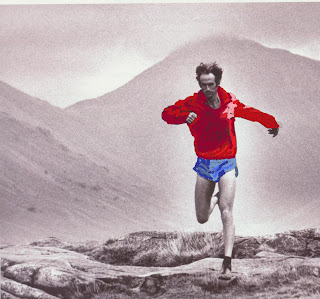 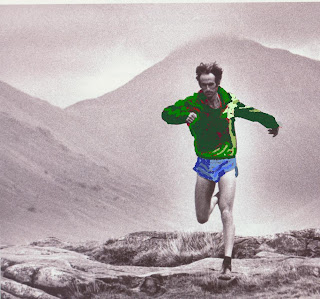 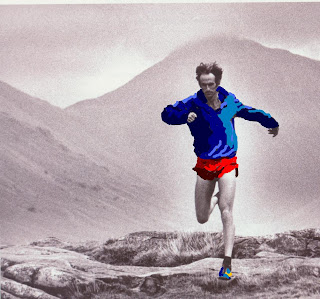 Now I was ready to start.  I'd originally intended to do this on stretched canvas but the one I bought was too cheap and nasty so, being too impatient to source a decent one, I cut and gessoed a piece of board.  I then drew the main outlines in pencil onto the gesso, using grid lines in the more detailed areas such as his face.  I blocked in the main areas using a dark red wash then proceeded to add the colours.

As I was doing the background it struck me that there was a lot of interesting detail missing on the original photograph.  As a fell runner myself I like to be able to make out the paths and features that are so familiar to me.  So I found some reference photos and proceeded to do a reasonably detailed background, knowing full well that I'd have to fade it out by scumbling to the required tone to make it recede.  This has worked quite well as the detail is still to be found through the haze.  For example the path up the western flank of Great Gable can be seen under Joss's right arm.  That brings back memories of battling up there in a monstrous gale in the 2008 OMM (Original Mountain Marathon).  (See this video at the 2:08 min mark to see the conditions).

This painting includes my first use of a palette knife.  I used it to obtain the markings on the rocks in the foreground.  Interestingly, I paint with brushes with my left hand but use the palette knife with my right. Very strange but I do like the effect it gives.  Perfect for those rocks.

I did two passes of the whole figure, making sure the values worked, until I reached the point where I thought doing anymore would spoil it.  Overall I'm very satisfied with the effect.  I managed (in my opinion) to get the figure to project out of the painting.  The end result is not yet where I want to be as a painter but I get the impression that painter's are never satisfied so for now I'm happy with the end result.  I hope others like it.
Posted by Mick at 11:09 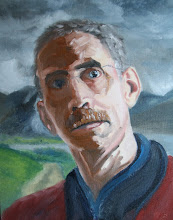 These are the musings of a hopeful new artist who has always been able to draw but has never realised his artistic potential. Until now! Determined to learn the hard way (by mostly teaching myself) I'm about to share my ups and downs in trying to get to grips with oil paints.

My aspirations and artistic tastes lie somewhere in the impressionistic direction with the likes of David Curtis. Being a natural drawer I simply can't stand most (but certainly not all) modern schools of art. To me any piece of artwork needs to have some criteria by which to able to judge it. Many pieces don't have this and many so called artists are, to be blunt, taking the piss.

I hope you enjoy my struggles. Any feedback would be gratefully received.

P.S. I have another blog Micksmountain about my running activities if that's of any interest.